Rock Camp is the jump start for future rock stars!  This program provides an environment for aspiring musicians to strengthen their skills, develop new techniques, and build confidence in performing. With practical instruction from professionals, students are exposed to the elements of performing, arranging original music, forming a band, and much more. Plus, a gig in the Great Hall of Universal Preservation Hall (UPH) to showcase their talents!

Preparing for Your Audition

Q: What do I prepare for the video audition?
A: Students should prepare two separate excerpts from the rock/pop genre of at least 16 bars. The two excerpts should be examples of contrasting styles and tempos within the history of rock and pop music.

Please submit your video as an MP4 file format, YouTube, or Vimeo link. Any simple recording device, such as an iPhone is acceptable. We just want to be able to see and hear you clearly. You may play along with tracks, but we must be able to distinguish you performing live from the prerecorded tracks.

Q: If accepted, what kind of music am I expected to learn for the concert?
A: Music will be chosen from a wide variety of rock music from the 1960’s to current day and determined depending on the groups interest and technical abilities.

Q: I’m not sure what to perform. Should it be memorized?
A: Your audition does not need to be memorized however we find that memorizing often adds to a level of comfort and confidence for you in the audition. Choose something you are familiar with and feel confident playing.

What is included in the cost of Rock Camp? The camp fee covers 10 days of professional instruction and break-out sessions with professional musicians.

Where is Rock Camp held? Rock Camp is held at Universal Preservation Hall, 25 Washington Street Saratoga Springs, NY. We have large-sized sectional rooms, as well as a state-of-the-art Performance Hall. Take a walk through UPH in advance! https://universalpreservationhall.org/take-a-360-tour-of-uph

Does my child need to read music to attend Rock Camp? While it is not required that your child read sheet music, campers should be able to follow a chord chart. We work with all levels of musicianship and will be sure to accommodate each camper.

What should campers bring to Rock Camp?

Drummers – Bring your sticks (and extras). One drum set will be provided. Drummers that wish to bring their own are encouraged.

Keyboard Players – A keyboard will be provided. Players who wish to bring their own are encouraged.

Does my child need to bring lunch? Yes. Students should bring lunch each day, there will be a lunch break and opportunity for socially distanced lunch with friends.

Where do I drop off my child? Campers should enter the main Universal Preservation Hall entrance at 25 Washington St, Saratoga Springs, NY 12866. Members of the Proctors Collaborative and Rock Camp faculty will be there to greet campers and guide them into the building.

Who makes up the Rock Camp staff? Rock Camp is run by the Collaborative School of the Arts staff and professional instructors. Our instructors are top-level local musicians and educators, each with many years of experience performing and teaching.

In the event of an emergency, who do we contact? Prior to Rock Camp, you will receive a handbook with helpful information as well as a contact information sheet for site supervisors and Rock Camp faculty.

Composer / Guitarist, Crispin Catricala received a B.A. in Music Composition from SUNY at New Paltz (82) and a M.S. in Music Education from the College of Saint Rose (93). He began studying guitar at age 13 and performing at age 17 with numerous groups. Crispin co-founded the regional celebrated World Beat ensemble Pangaea (92-07). The 15-year-old ensemble, known for mixing equal parts Caribbean Funk, Afro/Cuban and Jazz Rock into a high- energy performance has shared the stage with such musical artists such as Hugh Masakela and Richie Havens. The band released a self -titled recording in 1998, which contains many of Crispin’s originally composed songs. Crispin also released a duet recording of mostly original compositions with mallet vibraphonist Dave Casner entitled “Geo Beat Duo” (2012). In addition Crispin taught at Ballston Spa Middle School as music instructor and jazz band director for over 25 years, where he often mentored and encouraged his students to form bands of their own. Crispin continues to teach privately in his home studio. He is currently performing solo as well with several projects including Geo Beat, The Stone House Trio and The Swing Docs.

Drummer/Percussionist, Andrew Hearn grew up playing in bands with friends around central New York. He began playing out professionally while in college at the Crane School of Music. After graduating, he played shows for Music Theater North (summer stock theater in Potsdam) which led to two 3 month tours of Europe. After returning home, Andrew started his teaching career at South Colonie Central Schools and has been an active member of the capital region music scene performing and/or recording with various rock, pop, jazz, theater and blues groups. He has played local concerts such as Albany’s Alive at Five, Concerts at the Plaza Series, Jazz on Jay St, Lark Fest, Captain JP Blues Cruise and more. Andrew’s drumming has been aired on local radio stations: 102.7 WEQX, 103.9, 106.5 WPYX, as well as XM Sirius Satellite Radio and local TV (Time Warner’s The Sounding Board). Recent recording credits include the Joe Finn Trio Plus One “Generational Dynamics” and Tas Cru’s “Memphis Song” and “Drive On”. Tas Cru’s three most recent recordings (with Andrew on drums) all have won a Syracuse Area Music Award for best blues recording. Mr. Hearn has an enthusiasm for the evolution of drum-set playing in all styles of music and he’s looking forward to rocking with you! 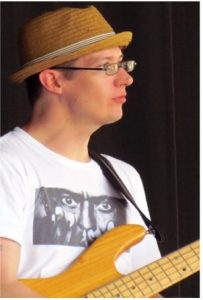 “Music has taken me on the most incredible journey and has been a vehicle for personal growth. To be a musician is to always be a student; it is a journey with no end, no true mastery, as there is always more to know.”

Get the latest updates from Proctors Collaborative!